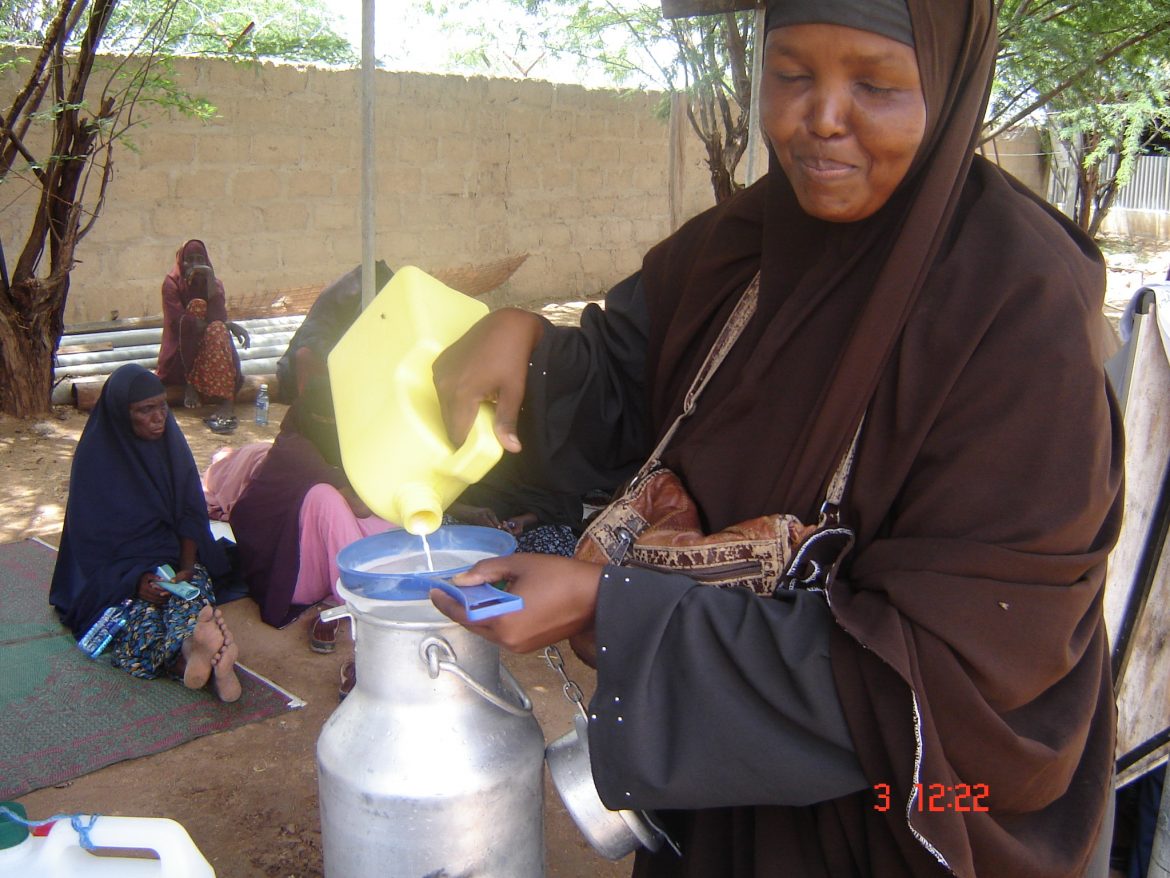 When Halima, a mother of seven from Garissa County in Kenya, decided to start a business in the camel milk business, she had three challenges. She and her family were poor. Formally they were cattle herders, but they lost their animals to prolonged drought. The family had no source of income and was receiving support from the community and other social support systems. Being a woman, Halima was treated with prejudice and had little influence in the community. She also had a husband who was very reluctant to allow her the time to run the business, despite being out of work himself. Eventually though, he allowed her to start the business with certain conditions, including that she limit her time away from home.

Despite the challenges she faced, the profits from milk sales grew. Halima was soon able to meet the food needs of her family and no longer had to rely on social support systems. But also, as her milk business progressed, her husband started appreciating Halima’s efforts and began to support her in small ways like collecting milk from herders and moving it to the roadside to await daily transport to Garissa.

In Garissa County, where increasingly unpredictable weather patterns and droughts are a regular occurrence, the economy, until recently, was underdeveloped to say the least. Women in particular were at a disadvantage. They were powerless, some having to deal not only with food hardships, lack of schooling for their children, and many other challenges but also the prejudice of men, even within their own family.

With the support of the Camili (camel milk) project, which used a value chain development approach to increase the quality, production and sales of camel milk in Garissa County, the women of Garissa have proven to be made of sturdier stuff than we might imagine. Some have proven their capabilities to support their families by running thriving businesses, which by extension has helped their families, many of their neighbours and the community as a whole. Women such as Halima have proven that they can withstand, and indeed thrive in the most difficult of circumstances.
Through her business, Halima was able to save Kes200/= daily for two years, with which she acquired 5 camels. This was the turning point for her family; camel owners have respected status in the community. Her family is now food secure and together with her husband, Halima supports other community members and can meet other needs such as medical and education expenses for her children.

The Camili project is now in its second phase. Such was the success of the first stage – which saw improvements in production, volumes and quality of the milk, co-operation and efficiency, as well as increased employment opportunities – that these achievements are now being enhanced and consolidated. In this second phase, the aim is to strengthen the efficiency and resilience of the camel milk sector, and secure livelihoods and food security for 10,000 more people. The camel milk sector can look forward to better economic progress even in tough situations, and thereby enrich the lives of the traders and herders – people like Halima.

For women in particular the project has had a remarkably empowering effect. Female camel milk traders who make up an incredible 83% of camel milk traders, have access to more opportunities, including funding from government schemes, which have benefited them and their families both economically and socially, and they have greater voice and influence in their households and community.

Local markets are full of confident, industrious women with independently earned money. This benefits the women themselves – giving them a sense of pride and personal power that they didn’t have before – but their families also benefit, as there are more resources to pay for school fees and health care.
Moreover, attitudinal change among men and community leaders has become evident. These business women’s economic empowerment has influenced and created change that will benefit both themselves and many future generations to come.

Many lives have been transformed for the better thanks to Camili’s support of the camel milk industry. The difference it makes to people’s lives, both directly and indirectly involved in the camel milk sector is remarkable – people have become self-reliant, no longer depend on aid to feed their families, and they prosper.

Women, in particular have benefitted in many areas of their lives. With their newly developed and supported entrepreneurial skills they now have a level of community influence that they did not have before, and they have a sustainable source of income to support themselves and their family. The impact that they’ve had on the camel milk industry means that they, the community and future generations can enjoy an economy that is resilient and has the potential to flourish into the future.

Help us to help more women like Halima provide for their families. Donate today